Choosing The Right Voice So Your On Hold Message Is Effective

Choosing The Right Voice So Your On Hold Message Is Effective 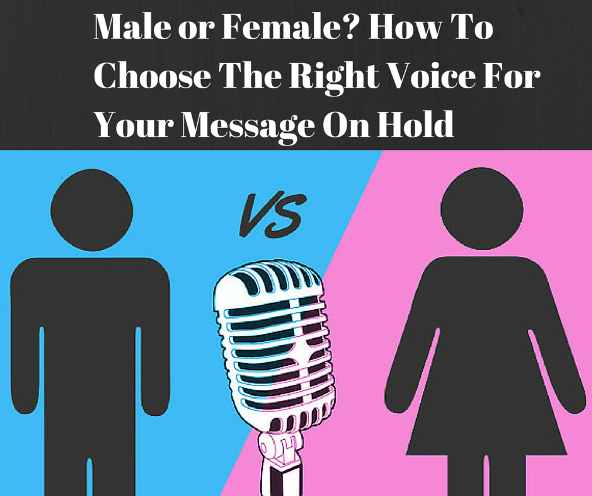 An on-hold message is often the first thing a caller will hear when initiating contact with a business. Choosing a voice to represent an organization requires a deep understanding of branding. Callers will undoubtedly have some expectations about what they’ll hear when they call a company. For this reason, it’s important that the voice used in a message on-hold recording creates a good first impression.

While you might think of the voice talent or music being used in an on hold recording is merely window dressing, you must remember that the sound of that voice affects the customer’s perception of your brand. The right voice can also bolster the caller’s satisfaction with customer service, and their sense of loyalty to a company. Choosing the right voice for your telephone on hold messaging may seem be difficult, but there is a science to choosing the right voice. Below, we’re going to guide you through how to make the right voice selection for your music on hold to properly present your brand.

While it might seem obvious to some (but not so much to others), knowing your customers is essential. The first rule of thumb is that the voice for your message on-hold voice must match the general image of the brand.

For example, a chic’, hip and trendy hair salon would be best suited to select a younger female voice for the on hold message. A voice artist who is in their mid 20’s to early 30’s will connect better with this type of listening audience and match the brand better than a male counterpart. In contrast, a middle aged male voice artist is better suited for a car dealer, law firm, accountant or insurance agency, as it relates to certain decision making matters.

According to a survey by Adweek Media/Harris Interactive which polled more than 2000 American adults to determine how consumers responded to male versus female voices in advertisements. Here’s what they learned:

– In terms of forcefulness, 48% of the respondents said that males sounded more forceful while 49% of those surveyed said that gender made no difference.

Thus, depending on your goal, choosing the gender can make a huge difference. For example, if you’re creating a forceful message, 49% don’t care about gender, but 48% do care; thus, you’ll satisfy 98% of consumers by choosing a male voice. If you want a soothing voice over, however, you’ll satisfy 92% of people by going with a female voice.

When it comes to on-hold messaging, there is more of a divide between choosing a male or female voice. Some people like to alternate  male and female voices throughout their production, which emphasizes change throughout the messages. Or, if your target audience is equally made up of both genders, than this may make the most sense, allowing you to appeal to both audience genders. While there’s really no right or wrong answer, careful consideration should be taken to ensure that the selection you make is what your callers want to hear and like to listen to, so that your on-hold marketing program will be effective and properly reflects your brand.

With that said, there are several other key factors to consider when choosing a voice for your on-hold message. Who does your audience consist of? Mostly female? Mostly male? Or, are your customers made up of an equal mix of both genders? What type of advertisement is it? Are you trying to persuade someone to do something, or is it more general in nature? How do you want your brand to make them feel?

Male or Female? Which would you choose. Give us your comments below

Giving Your Brand a Sound Make Over

On Hold Messaging Offers An Affordable Way To Educate Customers About Your Business Without Breaking The Bank!

Setting the Standard As a Better On Hold Messaging Service Provider

5 Stats to Consider Having An On Hold Marketing Strategy

Make Every Cent Count With On Hold Messages