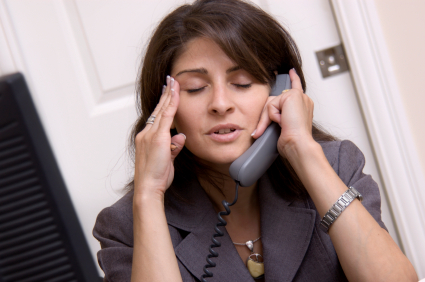 Dr Michael J Baum is a professor of biology, and head researcher at the prestigious Boston College. Recently, the research team at Boston College has found a significant link between severe headaches, and the amount of time people spend on hold listening to preprogrammed music.

The study appeared which appeared in Massachusetts Health Monthly, points out that people who spend an average of  less than 5 minutes on hold listening to various musical offerings not of their choosing experience migraine-like symptoms, nose bleeds, dizziness, and in some extreme cases diarrhea.

Dr. Baum indicated that it was semi-irrelevant what type of music was played, “We brought in a broad range of music typically played while people are on hold. In almost every instance, whether it be ‘Shimmering Electric’ or ‘Exotic World Beat’ we had a mess to clean up in the experiment room after the fact.”

The study was performed over two weeks and utilized 315 subjects from all backgrounds and age groups said Dr. Baum. “People tended to get so unnerved about the midpoint of the experiment (under 5 minutes) subjects began “tossing objects around the room waiting for a service representative that will never come.”

With the American work force getting fatter and lazier Dr. Baum expects hold times to skyrocket. “We could be looking at an epidemic in the near future.”

The study concludes the general public should avoid hold times over three minutes. Don’t make your waiting callers on-hold sick! At The Original On hold Inc, we specialize in providing creative, soothing and pleasant on-hold audio branding messages, proven to increase caller-retention (will wait up to 3 times longer than a business using silence, radio or canned music) without giving them a migraine, or making them want to throw up in their mouth.

Music On hold and Why Your Businesses May Be Next to Pay Hefty Fines!

Add Custom On Hold Music to Your Microsoft Teams Meetings

What are some ideas to resurrect a Lost client?

All On Hold Companies Sound Alike – Not!

When Callers Are Exposed to On hold Messages the Benefits Can be Numerous!!

Upselling Techniques For Your On hold Script Copy